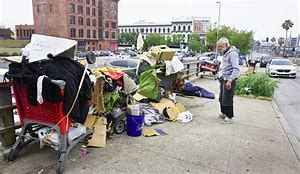 What can we do about the Homeless?

So I was on the Albuquerque, New Mexico city bus the other day when a couple who looked rather homeless themselves got on.  Soon the gentlemen began having a conversation with the bus driver about one of his friends in crisis, that is using drugs.  This being a Saturday was a huge inconvenience for him since the buses do not run that often on Saturdays.  During the course of that conversation we learned the couple was on food stamps and public assistance but he had recovered from drugs 18 years previously.  The reason I am mentioning this is it will come back later in the article.

The conversation changed to how they had recently left California because Los Angeles was filled with to many homeless.  The Conservative bus driver agreed after they talked how many taxes you have to pay and cost of living and every other Republican talking point about how horrible the liberals are running that state; my skin began to crawl with ever fiber of my being it took everything I had to remain quite.  I just wanted to shout: "Gee California is the most populous state in the country millions of people moved there the economy is robust and flourishing?  Say what you will about California but I don't see people flocking to Oklahoma or Mississippi!"  but I didn't I held my tongue.

This is when the conversation turned around to the homeless and more liberal bashing.  Seems that two people who do not live in Los Angeles are upset that the liberals are providing bathrooms for them.  They state this encourages the encampments to remain and bring down the values of the neighborhood.  I always find it amazing how the conservative mindset is always in favor of taking something away.  Doesn't matter who it is just get rid of it, people should pull themselves up by their own bootstarps and all that crap.  They seem to forget that Republican policies and the 2008 economic collapse are a large portion of the reason these people are homeless.

I am not giving a free pass to liberals or the Democrats here either.  It is fantastic they are providing outhouses for the homeless so that they are not overwhelming neighborhood gas stations and fast food restaurants, and of course if they actually went in the street the disease and stench that would follow, but they should be using the money it takes for this to actually provide permanent housing.  If we can spend one billion dollars on a war and rebuilding of the bombed out country we can provide a few million to keep homeless off the streets.  This would reduce crime, it would reduce people from avoiding those businesses and neighborhoods that have to deal with the encampments.

William this has nothing to do with the stock market and economics?

Well thank you for interrupting I suppose I was going off on a rant.  The cost of city services in your tax dollars drain the local economy.  The police, fire department and city clean up crews all need to be paid for the extra call outs they receive.  Now I know I do not talk much about bonds and the bond market here but cities issue bonds for public works and these bonds are rated by companies like Standard & Poors, and Moody's.  The overall cost in interest is determined the same way you pay more interest if your credit is bad.  If the cities rating is bad they pay more interest.  Cities like Los Angeles, Albuquerque, Las Vegas, Phoenix and other southern cities pay in taxes and in some cases bonds ; more since  they have a year round homeless problem.

This is something we need to look at as a country as a whole.  We need to stop this large government no one deserves a handout mentality by conservatives, by pointing out how each of us has in someway gotten a free handout from someone, we have not done this alone.  This includes people like Congressman Paul Ryan and Cabinet Secretary Ben Carson who now want to eliminate those programs.  Yet both received government assistance in their childhood.  Even our two conservatives having the conversation need to realize this; first the bus driver who has a pension and benefits do to a "liberal" union that fought for him to have the job.  He is in turn is receiving a handout from the workers that fought and formed that union so that the benefits are paid to him.  He is lucky he works for the city since many of those same benefits have been removed by corporations and Republican policies created by Ronald Reagan and put into full steam under George W. Bush. as well as the rider who is actually on government assistance if his conservative friends in congress have their way he will lose that assistance and become one of the very homeless people he so despises.  I just hope he never has to use the bathroom.