Who is this Guy? - Why should I listen to him? 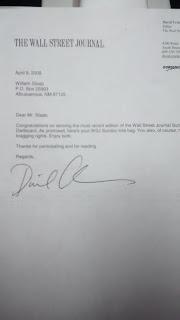 My name is William Staab, I am the the 21st and last winner of the Wall Street Journal Dartboard Contest.  I know what you are thinking.  So What? This guy thinks he knows more than someone at Goldman Sachs, the Federal Reserve or even the White House economic advisors and economists?

Yes, yes, I do!  Well now that my ego has been stated for all to see, reality is probably not; why because that is the problem with every economist, every advisor, every investment firm, every pundit, CEO or CFO that actually speaks in a magazine or on major business networks and television shows is.  As we move closer to a world economy as a whole, no one can actually grasp the scale and depth of the economy from a macro perspective.  Most times even in a micro perspective they still (and I) will get it wrong.

Winning the Wall Street Journal Dartboard is still no big deal you say?  Let me provide you with a little history, these are not 100% complete facts but to the best of my knowledge and understanding this is the history:

In 1988 students at Stanford University came up with an idea that monkeys could predict stock market winners better than actual investment advisors and their picks by throwing darts at a dart board.  So the study and contest began with only licensed investment advisors, the monkeys won more often than not. (probably not real monkeys but students throwing the darts).  Later in 1993 the contest was opened up to regular people and published in Wall Street Journal until 2013 as a weekly game to follow.

How this was done originally I do not know so I am using math based upon the contest when I played it in September 2008, the contest ran for 6 months 4 people played against 4 random picks, a new contest was launched every 3 months so only 12 humans could win a year, if this was true going back to 1988 then (25yrs x 12) only around 300 people have ever played the game and only 21 human beings ever won.  That means being human you have a 7% chance of winning a given contest.

Big deal!  You thought that right?  Ok, 7% chance of winning, my stock pick Rangold Resources was selected in July of 2008 during a booming economy that was starting to falter, it is a gold mining stock.  Why did I pick it?  Just like recent movies, I foresaw the collapse of the Real Estate market.  I was a local Albuquerque, NM Realtor at the time and wrote a blog:  Sellyourhousenewmexico.com, I had been speaking about the collapse since June of 2006.  Big Deal, I know, I know I am getting there so the economy fell apart the market tanked.  In September 2008 - March of 2009 it was the worst economic decline since the great depression.  My stock however finished up by over 20%  think about that had you invested in my choices you would not have lost money in that down market, you would have gained a 20% return.  As of March 2009 no one ever again won the Wall Street Journal Dartboard contest.

So I think it is a big deal, like I said I will post an email address and a Paypal account to donate to me only to keep website running and hopefully financially to be able to devote more time to the blog.  My goal is not to make millions of dollars off of you, I can do that with my own stock purchases as you will see.  This blog is only to provide you with knowledge, and understanding free of any corporate interests, a tool to help you make wise investment choices, not to promote other companies or financial advise (I will quote publications, articles, and companies from time to time, I think you should always get advise from multiple sources).

Will my personal politics, opinions and life experience be revealed along the way, absolutely.  If you disagree with them air them somewhere else.  After all this is my blog you disagree with me, go write your own blog. Will I take constructive feedback yes.  Will I correct errors I make yes.  Most of all have fun enjoy and let's learn a lot together.